Special Handling of HCFC-22 at Standard

The Environmental Protection Agency has aimed to reduce HCFC-22 use, which hurts the ozone layer and contributes negatively to global warming. Since 2010, the E.P.A. has banned the sale of new air-conditioning units that contain HCFC-22 and has promoted recycling of the gas from old machines so it will not be released.

However, there are some contractors that are not storing and recycling HCFC-22. Instead of dealing with finding and repairing holes in aging units, they pump in more coolant to avoid a more complicated solution. They “fix” that unit by emitting more gases into the atmosphere. Needless to say, this short fix makes the air conditioner run for just a day or two after that.

Another big issue is that regulatory loopholes allow manufacturers to sell parts that rely on HCFC-22, so systems using the old gas can be refurbished rather than replaced. Even where there are regulations — for example, repair technicians are legally bound to collect old gas rather than vent it — there is little enforcement. 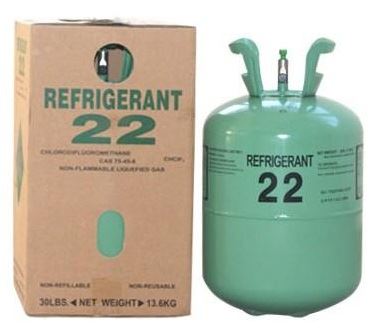 “It’s totally illegal to vent gas, but it’s also totally inconspicuous,” said Stephen O. Andersen, a former E.P.A. official who has campaigned for better controls on cooling gases. “I always watch like a hawk when they’re in my yard,” he said. The concentration of HCFC-22 in the atmosphere is 218 parts per trillion, more than double the amount two decades ago, and it gets there in a number of ways. Low-quality or old equipment leaks, and detecting the colorless and odorless gas without pressure-testing devices is difficult or almost impossible. Sometimes the release is intentional because it’s cheaper for contractors since the technicians spend less time on scene.

Bobby Ring, who runs a servicing company in suburban New Jersey, said that makes it hard for him to be competitive. “There are contractors out there who refuse to make the investment in recovery equipment to reclaim or recover refrigerants, and no one is looking, so — phsssst — they let the refrigerant escape,” he said.

When Standard Heating & Air Conditioning properly install your cooling equipment, we will first siphon a machine’s coolant into a canister, then we will transfer it to a bigger container for later recycling (see the pictures below).  Being environmentally friendly takes time and effort, but sustainability and community responsibility are part of Standard’s core values. 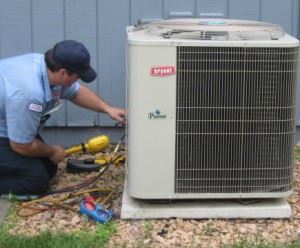 Asked about the lack of backyard enforcement, David Bloomgren, a spokesman for the E.P.A., said it is “a challenge to locate or obtain evidence of illegal venting,” so the agency focused on large polluters but encouraged homeowners to report possible backyard violations they observed to an E.P.A. tip site at epa.gov/tips/

While it is hard to quantify exactly how much coolant is illegally released from America’s residential air conditioners, the E.P.A. estimates that only 7 percent of used coolant is turned in for recycling. Standard Heating & Air Conditioning is part of that.

“The vast majority of it hits the sky,” illegally vented, said Kevin Zugibe, executive of Hudson Technologies Inc., a company set up to recycle harmful refrigerants.

Manufacturers could sell condenser units — the major component of every air-conditioning system — that were empty of coolant gas. Then, after installation, a worker could simply add new HCFC-22, complying with the law.

Price is important, but that price at the expense of your safety is not the kind of long-term solution homeowners are looking for. In other words, it is too expensive to be cheap when replacing or repairing your air conditioning system; you and your family cannot afford to lose your peace of mind.

When deciding who to trust for your heating and cooling needs, you want a company that will do the right thing for you; in other words, a company that sets the standard for taking take care of their customers. What a better example of trustworthiness than a company that decides to do what’s ethical and morally correct for the environment proactively.

Click here to read the full article in the New York Times. To see the NYTimes Video click here.