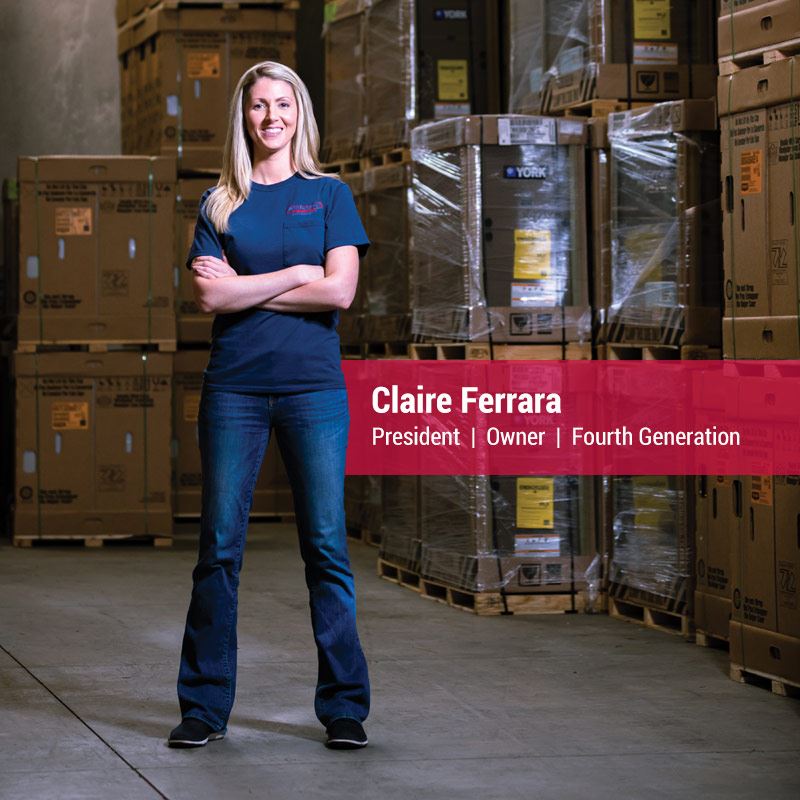 When Claire Ferrara became President of Standard Heating & Air Conditioning in 2019, she also became the third generation of her family to run the 90-year-old company (and fourth generation to work in the business). We sat down with Claire to learn more about what led her to her current role and how she plans to lead Standard into the future.

You’ve actually had quite a few roles at Standard before taking over from your father.

Yes I have! When I was younger, I worked as a Customer Service Representative, in the parts department, in accounting and spent time with technicians in homes. Since coming back to the business several years ago I’ve been a Sales Representative, the Customer Experience Manager, the Sales Manager, and now President. I’m very excited.

What influence or encouragement did your family have in your decision to start working for Standard?

When I was growing up my Dad pretty much told me to go work elsewhere, to learn about other career paths and other interests and not to come back to Standard Heating. He really did not want me to feel any pressure to work here just because it was our family’s business and he wanted to make sure I found things that made me happy, not just what he thought would make me happy. Dad stuck with that message until he was really sure that I knew for myself that I wanted to be here but once we both knew that, he was my biggest supporter.

My uncle Todd was always supportive of me working elsewhere to learn other skills, but he never hid his excitement that I might have an interest in joining the business long term. I think he was counting the days and minutes until I was ready to come back.

When did you know you wanted to take over the family business?

I knew I wanted to work here permanently when I was 19. No, really! I was working that summer with the installers, replacing equipment in people’s homes. The very first home I was in, we did a big replacement project where we pulled out an old gravity system and had to build all new ductwork and put in a new furnace and air conditioner. The customers were so happy when it was done and were so much more comfortable in their home. It was fascinating to see how the installers laid everything out, how they could visualize what the end product would look like before we even began and it was so satisfying to be a part of physically building something that would help people enjoy their home. I realized the work was really an art form but also part science and really required skill. It was that job that made me realize this was where I wanted to be.

So from that moment, what did it take to get here, owning and operating the business your grandfather started?

Well, I wanted to have a plan early on. I remember going to my Dad and Uncle in my early 20’s and saying “I’m serious about this, so what do I need to do to make sure I’ve got a legitimate shot at making this happen?”. It took a lot of focus from that point.

I earned a technical degree after my four-year degree and then purposefully chose work opportunities that gave me exposure to a variety of businesses. I spent a few years working in another construction-related business, a few years in the corporate world and a brief time with a non-profit. I wanted to get a sense of how each functioned. During this time, I was also busy studying for certifications, seeking out mentors and building my own network.

All that was just to prepare me to come work at Standard Heating. Once I was back there was a whole other list of things to learn and skills to demonstrate and time I had to put in. I’ve passed up a lot of fun with friends and a decent amount of sleep. Haha. I had a long checklist of all the things I had to do and learn, which may make it seem like the path here should have been pretty direct, but it didn’t always travel in a straight line. I doubted myself many times and made my share of mistakes, but I did have a purpose. And here I am!

You said you sought out mentors. What would you say to women or anyone looking to own their own business?

I’d share two main thoughts. First, you don’t have to have all the answers. You don’t have to be perfectly prepared to start. Don’t doubt yourself! No business ever goes perfect, so just jump in, learn, evolve, surround yourself with good people and if something doesn’t work, you’ve learned what not to do going forward. I see too many women who won’t take on the new project, or the new role because they think they need to know everything before they can get started and that’s just not the case. Go for it!

The second point is never underestimating the power of resilience. You are going to get knocked down, you’re going to hear “no”, you’re going to make mistakes (sometimes really big ones) and it really counts that you just continue to show up. Good things will happen if you work hard and keep showing up, you’ll stay on that path to getting what you want.

I want people to know that the trades are such an awesome place to be and would love for more women and men to explore careers in our industry. There are opportunities to work independently, to be part of a team, to work directly with end-users or be more behind the scenes, and it’s pretty cool that many of the roles are a part of actually maintaining or fixing or literally building the community around us. There are so many ways a person can contribute to the work that needs to be done and it often works that have a significant impact on others. I feel fortunate to have grown up around HVAC and now I want to spread the word and get more people to join in the fun!

Well, I need to head to a sales meeting right now.[Laughs] The work never stops! But that’s why people have trusted us for four generations, we never stop working hard to serve our customers. I’m going to do my best to make sure it stays that way for a long time.