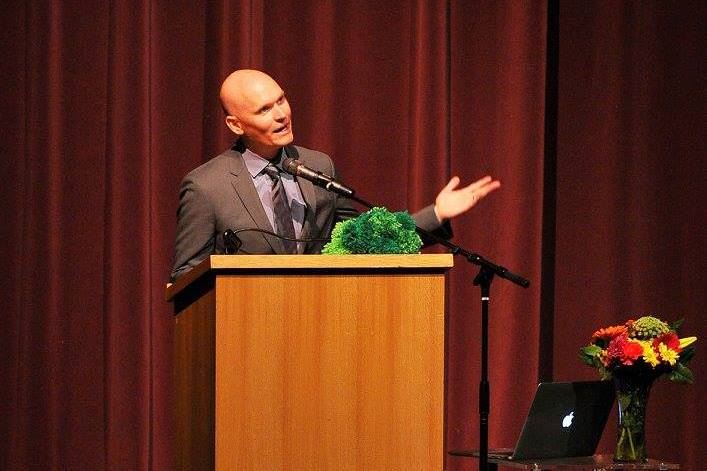 If you’ve ever had the pleasure of reading a work of serious fiction by Anthony Doerr, including his recent Pulitzer Prize-winning historical novel “All the Light You Cannot See” – you might be surprised to learn that Doerr is a funny man. Actually, he’s hilarious.

The accomplished, multiple award-winning author provided the grand finale to the 19th season of the Pen Pals author lecture series last week at the Hopkins Center for the Arts. Pen Pals is presented by Friends of the Hennepin County Library. Standard Heating has proudly provided financial support of Pen Pals at the gold (highest) sponsorship level for the past two years.

“Thanks, in part, to the phenomenal support of everyone at Standard Heating, Pen Pals is able to bring in outstanding writers. Not only do Pen Pals lectures encourage people to read the works of some of today’s best living authors, the program raises crucially needed funds that support libraries and important literacy programs,” said Friends Executive Director Kristi Pearson.

Pearson made her comment before the commencement of the Anthony Doerr lecture. Yet, calling Doerr’s presentation a “lecture,” which might conjure images of a tired college professor droning on to a class of bored students, is a woeful injustice. Doerr engaged the sold out Pen Pals audience with the story of how he became a respected writer of serious fiction known for precise attention to the physical world and a gift for metaphor, all while making people laugh to the point of tears.

Doerr explained that the roots of his commitment to excellence and originality all could be traced to his childhood in Cleveland, Ohio. Doerr’s mother, a traditional stay-at-home mom, was far from traditional (much to young Anthony’s dismay). When other kids were eating bologna sandwiches and Little Debbie cupcakes for lunch, young Anthony Doerr was dining on sandwiches made of homemade bread and alfalfa sprouts, with a side of homegrown heirloom carrots.

“Do you know how hard it is to trade an heirloom carrot for a Little Debbie cupcake?” he asked with mock incredulity.

Young Anthony had other embarrassing, yet formative experiences during his childhood days in Cleveland. Chief among them: making his own Halloween costume in the hopes of winning a neighborhood costume competition.  A book he found at the local public library inspired the costume.

“It was called award winning, easy-to-make Halloween costumes,” Doerr recalled. “Neither of those things turned out to be true!”

He remembered working for weeks on his costume, which involved copious amounts of cardboard construction paper and black markers. The result: “a ninja warrior worthy of leading any army across a field.”

That was, of course, until it started to rain on Halloween night.

As the enraptured audience collectively moaned, Doerr recalled how all of his hard work and dreams of Halloween costume glory were reduced to a soggy mound of dripping black ink in a matter of minutes.

When he arrived at the home of the parent in charge of judging the Halloween costumes, young Anthony sat in a corner embarrassed and alone – until an empathetic mom decided on the spot that there should be another award for “most original” costume, which, of course, went to Anthony.

“I didn’t even know what ‘original’ meant at the time, but I was pretty sure it was a synonym for ‘crappy!’”

Fast forward a decade or two in the life of Anthony Doerr and you will find an author who has been honored with some of the most prestigious awards in the world of fiction including the 2015 Pulitzer Prize for fiction, four O. Henry prizes, three Pushcart Prizes, the Rome Prize, the New York Public Library’s Young Lions Fiction Award, the National Magazine Award for fiction, a Guggenheim Fellowship, and the Story Prize.